how are you doing lately? guess you are pretty busy again.... :) well, i guess it was just a month ago when we last exchanged emails. :)

sometimes, i do wish to be a high school student again. and in a way, enjoyed my happy-go-lucky life then..... now, there are decisions to make, though i know i have some more time to enjoy or think things through.... i am a depressed teenager..... although, i dunno, i guess i have already made my decision on that part of my life, which means i have to learn from those and make sure that i don't make the wrong decisions.....

the future can bring us to so many places..... where will i end up? where will we end up?
so many things to miss, and so much to look forward. at least i look forward, but of course, i just hope that i don't expect too much.... well i guess if i work hard for my future, why not.... i hope i can live my present as well.....

anyway, hope to hear from you soon! :)

I would like to invite you all to Tzu Chi's Bazaar at Le Pavillion (along Roxas Blvd, near
the Toyoto Manila Bay area) this coming October 9-10. There will be different booths where
you can do an early christmas shopping or just look around.

If you have any questions regarding the event, to buy tickets (to buy stuff, you buy such
tickets which can be used as corresponding to the peso amount/value on that ticket), to
inquire about the organization, or how to join the bazaar(either as supplier or sponsor),
please call the Tzu Chi office at 7325714 and look for Peggy or Chieh Fang for more details.
:)
I hope to see you there! :)
~Grace Limtanhoa

this is the right side of the lobby. :) 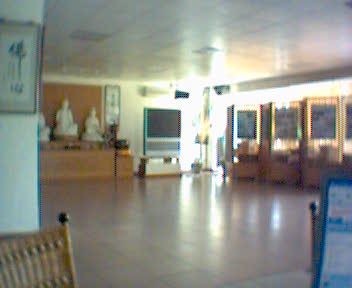 Posted by Grace at 5:51 PM No comments:
This is the leftmost part of the lobby. :) 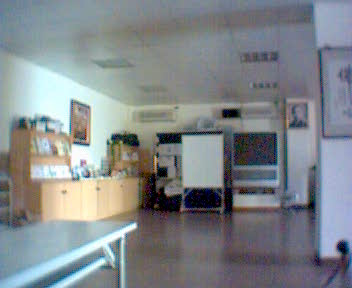 Posted by Grace at 5:51 PM No comments:
That open door leads to the Admin Office. That's where office personnel work. well, i should be inside as well, but anyway.... 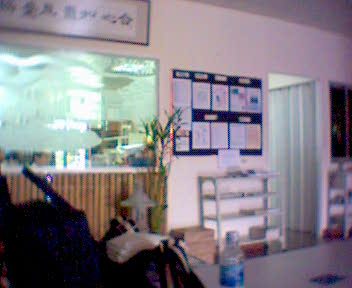 Posted by Grace at 5:50 PM No comments:
this is a part of the lobby where they entertain newcomers. :) i actually sit at the rightmost set of table and chairs. Was actually working in the Admin before, but then a new employee came in and since i do have a laptop, i am relocated. :o :) 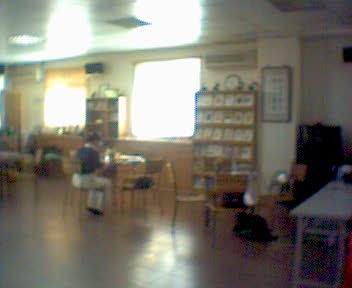 Posted by Grace at 5:50 PM No comments:
This the room in the Tzu Chi Manila Office where we eat, or have meetings. :) sort of a little multi-purpose room. :) 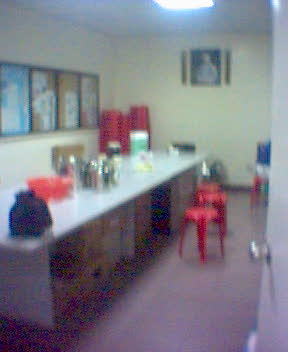 Yup. The fifteen photos below were taken at Dencio's during dinner on August 29, 2004. It was Benj's despedida, before he left for a year of studying Mandarin in China the next day, August 30, 2004.

I thought i wouldn't be able to go, but thankfully, China Boy here went to fetch me. :) Thank you Benj! :) And of course, this "party" wouldn't be possible if not for Dong (Diana Ong). :) Oh, and Louie, thank you for always driving me home. :)

Well, it was kind of spontaneous, so not much people were invited. :) But was a good thing that more people came than expected. :)

Of course, Louie arrived first, followed by me and Benj. Charis and Rochelle followed. then Dong, Chard, Ivan, and all others. :) I can't remember the order people came, i just remembered how many people came. :)

It was fun. We were talking, sharing, taking pictures. :) Relaxing. :) Most already graduated and are looking for a job, a few are still studying(like me), and some already working. :) i really can't tell much anymore, because we were talking under different groups during that night, and i can't recount all all-together. But hey, what's important is that we got together and enjoyed each others' company. Well, for me that is, even if it sounded mushy/corny/dull. :)

What do you guys think? for the next get together, cheers! :)

OH, and don't forget, JCA HOMECOMING on OCTOBER 2. :) I don't have much of the details yet, but don't hesitate to contact my sister for questions. :) (See details below!) :) See you all there! :) 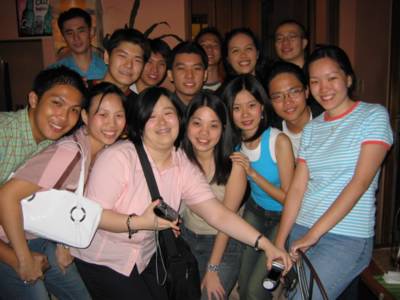 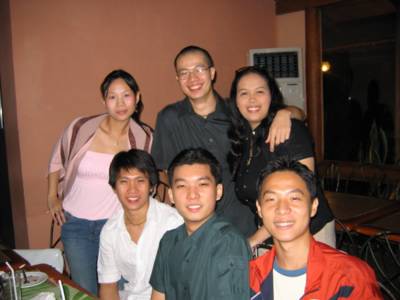 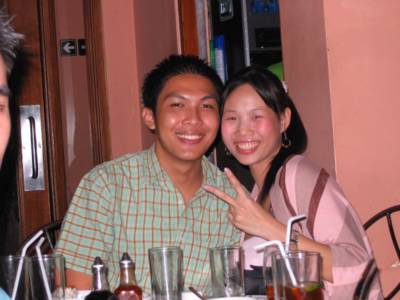 Posted by Grace at 10:22 PM No comments:
All the girls in one shot! :) Standing: me, Lins and Dong. Sitting left to right: Charis, Rochelle and Aileen. :) 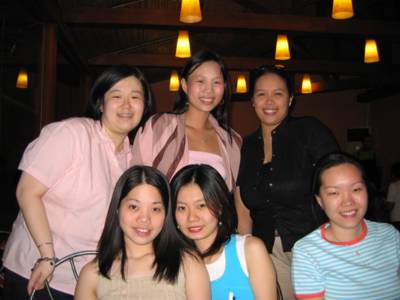 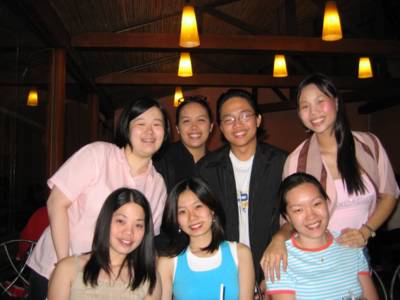 Posted by Grace at 10:16 PM No comments:
Benj, Aileen, and Kelvin -- very deep in discussion. 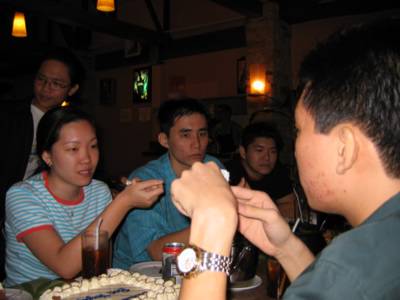 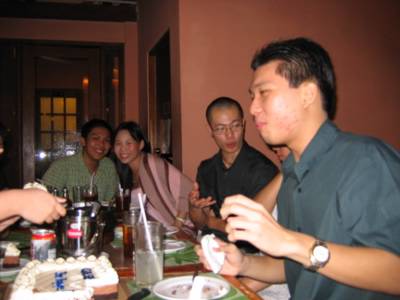 Posted by Grace at 10:11 PM No comments:
Are they watching Benj eat? or are we taking pics of Arti and Lins? :) 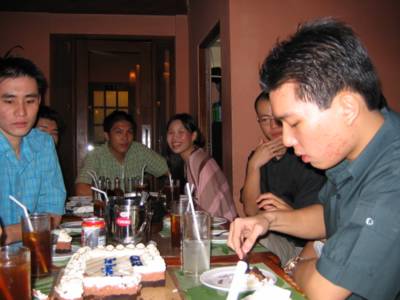 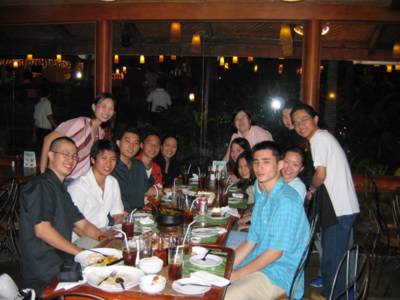 Posted by Grace at 10:07 PM No comments:
Benj ready to slice his Bon Voyage cake. :) 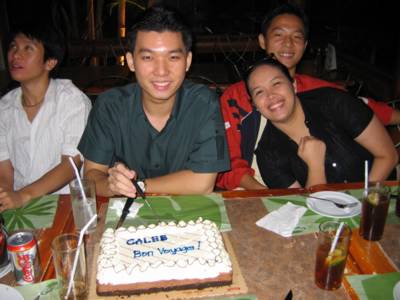 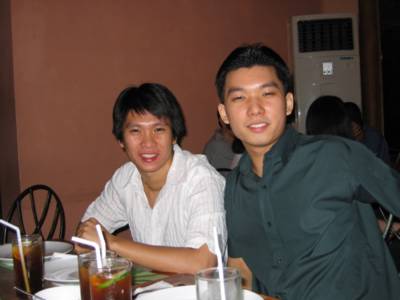 Posted by Grace at 10:03 PM No comments:
Grace, Charis, Rochelle, Aileen and Kelvin (ano kaya iniisip nya? [what could he thinking of?]) 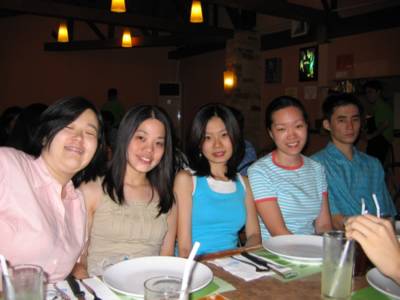 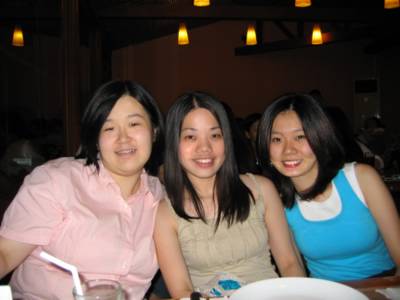 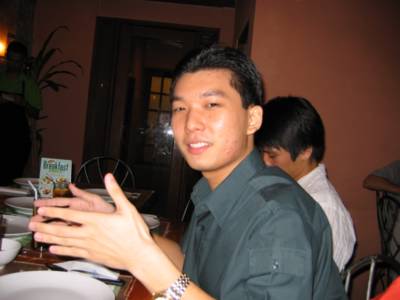 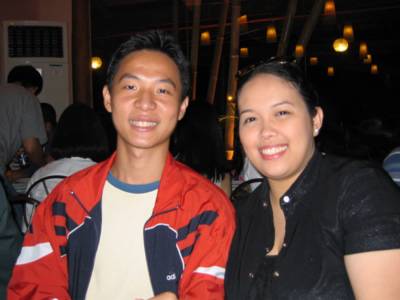