i woke up early, took a bath (oh, by the way, did you know that we suddenly didn't have any water running through our water pipes as of Friday evening? luckily, though not really that prepared, my parents were able to get people to prepare water to be used at home. and they kept on buying distilled water for drinking purposes.), went to attend the medical mission of Tzu Chi held at the new Still Thoughts Hall at Cordillera cor. Agno. Sts.. I stayed until lunch time, but didn't eat lunch there anymore. was really tired, and was sort of zoning out while driving (not sleeping, but did know i was really tired.). but i got home safe.

i was supposed to go out this afternoon - a friend from Thailand was supposed to arrive this afternoon, but his trip got cancelled at the last minute today. It's so cool how we can travel here and there so conveniently, especially when we have the means to do so. :) hehe :) Before, it feels weird to travel here and there, but after getting to travel, it just seems normal - far places seem so near. :) You can come and go as you wish (i guess after some planning and spending first). :D so, i was supposed to be out the whole day today, but then, since he didn't arrive, then plans were scrapped. oh well.... in a way, i guess it is a good thing. i am really tired from this morning. if he did arrive, i would have been really tired even while hanging out, and it would be taxing for me to drive home late at night. because after eating lunch at home, and watching tv for a while, i really felt tired, not feeling like watching tv, and ended up sleeping the rest of the afternoon just to make up for the hours of lost sleep. now, am somewhat up and about. i told myself, "yeah, i wouldn't have the energy to really stay out. good thing i am home now and can get some rest."

well, had late dinner, and just watched tv... really felt like reading something, but yeah, pretty lazy. laziness gets the best of me. i wonder, "why do i always want to be lazy instead? is there really a reason for us to be lazy in doing something?" and of course, a distant memory flashes by, and i remember some other past event that leads me from one to another. :) hehe :) and here i am, thinking again - obsessive-compulsive thinking.... though i am trying to curb this "obsessive-compulsive thinking" since it always gets me into trouble that i don't really want to be in - creating self-doubt and doubt on people that i really care for. it brings out the worst in me that i know i should accept but should not rule me. fear... it constricts us into the small space that we still thought is our own to control - hoping to still control ourselves and hopefully, others and the events that surround us. Just click on the picture to go to my googlepages. :) yeah, i am uploading pictures there, again. :)
Posted by Grace at 11:32 AM No comments:

Well, i was just uploading pictures of my stay in china this year. anyway, i have to re-"upload" it since something went wrong.

I was actually itching to write a blog during work. but now that i can do so at home, i feel pretty lazy. :) hehe :)

so far, work is kinda okay with me. sort of working out - i get to do what i want to do (which is more on writing and editing, some picture-taking, translating and such, aside from the organize this stuff and that, group this and that... :) ) It's all good, so far. :)

Just this afternoon, we went to Malabon to distribute relief goods to those affected by the fire at the Catmon area. i didn't do any actual handing out of goods - i was there more on the documentation side by taking pictures and to be writing down an article about the "activity". but when we got back to the office, i was pretty tired even when i didn't do anything strenous. You see more of the things that we don't usually see or notice. but it depends, i guess, if we still see when we are there or we just ignore it.... at times, i realize that i do "blind" myself from these stuff....

Waking up from hibernation....

Hey there! I don't know if anybody is still checking out this site. hehe :) I have been in hibernation since January this year. First, as i have explained sometime this year in this blog of mine, i wasn't able to view blogger over at Beijing, therefore, even with the DSL connection we have there, there is no use for me to upload pics and post my blogs, not knowing how it came out. Blogs are censored there. So... :)

I got back July 20 this year. Partly not wanting to come back and wanting to just continue living the "dream" of being "independent", partly needing to come back because my reality now is to find a job - that is the next thing that is in line and must be done. And so, i came back home (as if i had a different choice - well i guess i do, but then, i didn't want to stay there in Beijing alone. i wouldn't last there.).

August, though i was somewhat looking for a job, i guess i am still in that dreamy state that i am still in Beijing, that things have not really changed that much. I don't really go out a lot here, but i guess if you compare me from way before (like in college and before i left), i enjoying going out now, to meet with my friends. Let's see, for August, I was out on the 1st (dinner with cousins), 4th (roadtrip to Liliw, Laguna to meet our close Thai friend that we met while studying in Beijing), 8th (met with another friend), 12th (spent almost the whole day with a real close friend that i know consider as family/cousin/sister), and from the 21st to the 25th, i was at Bangkok with my "cousin" to visit our Thai friends (my classmate in Beijing, and our Thai friend (the same people we met in Beijing).

September - well, i started becoming more serious in looking for a job. I told myself before i left for Bangkok that after the trip, i will be more serious when it comes to looking for a job. I still go out though. :) Well, once a week, i take a night looking and applying for jobs over the internet (through Jobstreet.com, Jobsdb.com). More or less, every Wednesday/Thursday, my aunt invites me to go bowling (this started since August) - i do go. :) and on the 18th, met up with my cousins (as the 4 of us were okay with meeting each other once a month). It was really nice to meet up. :) Around this time, my mom was still really strict with my going out - very strict. I feel chained, and that is one reason why i feel that i want to "fight" it, but i didn't. I didn't want to cause any "disturbance" or conflicts at home. I really wanted to change for the better (controlling my temper and such). But it also made me sad because she is preventing me from meeting my friend-cousin that i really love meeting up with; my mom doesn't approve of her, fears that i will be influenced into doing things when in fact she must realize that if i do things, it is not because i am influenced, but it is because i decided to do so. Whatever happens, i decide, so she cannot blame anyone else for the changes that she sees in me. I decided to change - whether i was influenced or not, and it will be my decision to allow to be influenced or not. But my mom and i did get to talk and i explained this to her. After that, she was more or less able to let me go out. She still doesn't like it when i go out with my friend-cousin, but there is nothing else that she can do to prevent me. I do ask for permission whenever i go out, and i don't just leave the house, so she can't say that she doesn't know where i am etc... Although she always says that i am always going out when, if you count the thursdays for bowling (around 4 times), and the monthly meeting of the 4 of us (once), and the just me and friend-cousin Janelle (once), then that would just be going out 6 times in a month, and not really every single day. My sister goes out a lot as well, but they don't stop her. It's just with me. And with my brother, he doesn't really like going out much. *sigh*

October, let's see. Well, i was getting sick a lot this month. So, i wasn't able to go to any bowling night. But i met up with friend-cousin Janelle on the 10th, and boy, did we have a good time! We just spent the night talking talking and talking. :) hehe :) Yeah, we just had a really long conversation. We were supposed to go driving around, but then, i guess we just felt so comfortable talking and talking, we just kinda forgot about it. :) On the 23rd, was out the afternoon to meet with a family friend, then met my cousins and my bestfriend for dinner to celebrate my birthday (on the 24th). I felt kinda sick that night (probably tired from the previous week) - felt it was cold even when i was just seated outside the cafe, no airconditioning. But i got better afterwards. :) Although for this month, i was really wondering and fearful that i might end up not finding a job. Was so depressed that i didn't know what to do and just wanted to cry (and i did). But well, lo and behold, i just got a job on the 23rd. I started working on the 25th, but it is just on a voluntary basis (meaning no pay yet), but the actual pay starts on November. No problem with me. :) [It's for Tzu Chi, a non-profit charity Buddhist Organization]. :) I am more or less an all-around personnel at the moment, but they make me do more writing and editing, and help out in printing, cutting, laminating, making calls, taking pictures for documentation and stuff. Well, at least i learn. :) And it keeps me busy, so i don't "think" too much about worries for the future, my "paranoia" and such. It felt so quiet there, and my heart seemed to be more at peace there. :) been looking for that "inner peace", and i felt it there. :) I've just started, so let's see how i'll do in a month, then in two months, and so on.. :)

funny how i titled this post as "Waking Up From Hibernation". :) Back in Beijing, one of my cousins kept on calling me Panda(熊猫xiong mao in mandarin). so what's the connection? anyway, it seemed that i did hibernate from blogging for a while, and now, i am back. :) hehe :)
oh well, got to go. back hurts.
Posted by Grace at 9:09 PM No comments:
Newer Posts Older Posts Home
Subscribe to: Posts (Atom) 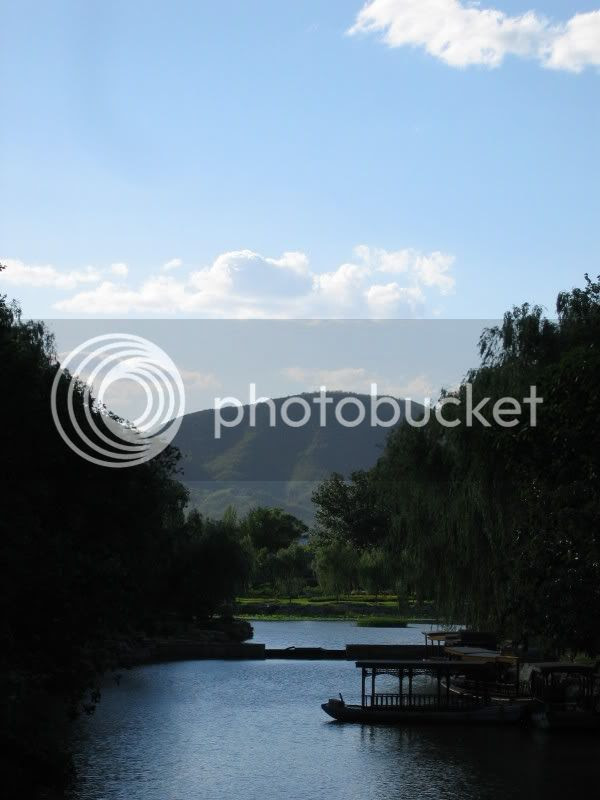